Are you a Gisborne fan? If you are, you might be happy to know that all three of my Gisborne novels are being featured in a Goodreads giveaway. Check out the Goodreads widgets below for your chance to win. 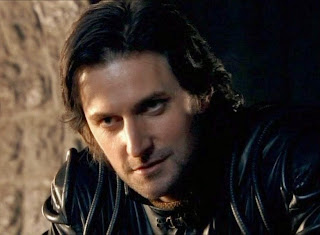 As a bonus, I'm offering ALL THREE NOVELS as a gift to a select group of people (Using a random number generator) All you have to do is answer this medieval riddle...

I never was, but am always to be,

None ever saw me, nor ever will

I am the confidence of all

who live and breathe on earth

Think you have the answer? Send it to me in a private message using the contact form (Right side of the blog) or on Twitter or Facebook and use "Medieval Riddle" in the subject line.

On Goodreads, there are two paperback copies available of each book. For my blog contest, there are ten sets of the trilogy available, so there are many chances to win. The contest ends December 1st, and the winners will be announced the day after. Good luck to everyone!

Giveaway ends December 01, 2014.
See the giveaway details at Goodreads.
Enter to win
Posted by Charlotte H. at 3:38 AM 4 comments: Links to this post

A Rough Draft of Novel #7

I'm not sure what will become of this, but I think it will be the beginning of my new Gisborne novel. I don't even have a title for it yet. But please tell me what you think of it so far! :)

Emerging from behind her dressing screen, Cassia ran her fingers through her hair, untangling her dark locks. Her hand paused for a moment – a smile coming to her lips as she looked upon her husband. Guy was resting in their bed, his large hands folded together on his chest. His eyes were closed, but she was certain he was not asleep yet. And even if he was, he would not be displeased if she stirred him.

A mischievous gleam came to light her eyes. No, he will not be displeased at all, she thought. Her smile deepened as she came to the bed. Slowly climbing in, she approached with the stealth of a nimble feline. She leaned in towards him, his full lips but a space away from hers.

His eyes opened, blue and shining.

“You dare to creep up upon a warrior?”

That deep and velvet-like voice never ceased to thrill her. Guy of Gisborne. Warrior. Father. Husband. The love of her life. Draping her arms around his neck, she kissed him softly, whispering against his lips.

“I seek my nightly token of affection, husband. But you seem to have forgotten it.”

She felt the instant response of his entire being. The warmth of his hands on her body – pulling her closer against himself. The heated look in his eyes and the quickening of his breath. But all were punctuated by the soft sigh that escaped him. It was not an especially troubling sound. After ten years of marriage, she could easily distinguish his noises – which ones were indications of pressing concerns, and which were less so. His response confirmed her thoughts.

“Forgive me, beloved. It has been a long day, and my mind has been much occupied.”

The usual matters of a day’s business,  though often a trying thing, were not something with which to be overly concerned. Still, even the expression of his frustrations – however routine their nature - brought out her most tender inclinations. Winding her arms around him, she nestled against his broad and muscular chest. In part to soothe him. More so simply because she found pleasure in the act.

“Tell me, my love. What occupies your mind so?”

Again he sighed, his hand stroking her back. “The thought of journeying to the Chateau Neuville on the morrow.”

Now she knew the troublesome root of his concern. And she was tempted to laugh, but suppressed it. Bantering was a part of their relationship – a lightness of spirit they both took joy in, for it often eased the troubles of life. But in certain instances, such as now, she thought it best to soften her teasing. Only vaguely in jest, she asked of him…

“Why should a gathering with neighbors trouble you?”

An audible huff escaped his lips. “You know well the answer to that. And I have decided I will not go.”

Readjusting her position, folding her arms on his chest, she looked at him – her dark eyes more serious now. Though not entirely without mirth.

As he had said, she did indeed know the answer. He gave it with his usual tone of surliness.

“The arrangement was settled long ago. Our daughter is to wed their son. I am well aware of the fact that one day, my family will be irrevocably fractured. Why should I endure yet another reminder of it?”

With a gentle tone, she offered him a reminder of a fact he had long known, but had often refused to acknowledge or speak of.

“They are to be our family, Guy. It is our duty to be sociable with them.”

“Sociability be damned,” he cursed.

She sighed. Reaching up to his temple, she twirled a lock of his black hair around her finger. In the eyes of the outside world, he was a fearsome creature – a man of few words who was formidable in battle and rarely expressed pleasure in anything. But she knew the true Guy of Gisborne. He could be formidable, yes. But his darker moods were most often born of concern for the ones he loved.

“Guy of Gisborne, you are far too concerned with matters that are yet to come. It will be many years before Thea and Lucien are married.”

“Then there is hope yet.”

There was a change in his tone and manner. She could see a sparkle in his eyes, and a hint of a smile on his lips. It made the corner of her own mouth rise slightly.

He turned his eyes away – a childish reflex if ever she saw one, for it was accompanied by the appearance of a grin.

“I have hope of discouraging the interloper.”

“Oh, Guy,” she said, playfully swatting his arm. “The boy is only thirteen. And he is hardly an interloper. He is merely a cog in a wheel – bound to the duty of his class and gender.”

It was some time before he spoke.

“Aye,” he answered at last, letting out a breath.

Hearing his silence, she wondered if he intended to forget the matter. But such a notion was quickly put to rest in her mind. She knew him too well. He was not one to let things go easily, particularly when it came to his family. With her head now resting beside his on her pillow, she watched the movement of his eyes as he stared up at the bed canopy. His mind was active and restless – a sure sign that he was plotting something. She remained silent, waiting for him to speak his thoughts, for she knew he would. He confided in no one else – not in the way he confessed all manner of things to her.

“Perhaps there is hope in the nature of the intended bride. Theodora is not altogether…suitable.”

The halting of his last words made her smile. “Our daughter, unsuitable? Whatever would give you that idea?”

From the sound of his gentle laughter, he was likely sharing her thoughts about their elder daughter.

“Can you imagine her as a wife? With that temper of hers, and her inability to control her words and actions?”

She shrugged. “She is yet young. Perhaps she will have a better disposition when the time comes.”

A brief silence fell between them, each lost in their own thoughts. It was his voice that softly broke the quiet.

“Do you think we have done wrong in some way? To have such a willful child?”

Cassia shook her head. “We have raised a loving and intelligent daughter. She is difficult at times, yes. But she cannot help her nature.”

“Which in truth is my nature. Is it not?”

They were both aware of how similar Thea was to her father. Cassia found it endearing, despite any difficulties they might have had with her. But Guy was often torn over his love for her and his duties as a father. He knew he was meant to be the supreme ruler and disciplinarian, but he sometimes found it a difficult role to play. And yet, he often chided himself on what he thought to be a chink in the armor of his masculinity. Knowing he was most liking having that very thought now, she attempted to soothe his pride.

“It is not as if she has been undisciplined, Guy. Claudia’s hand has been very strong.”

“But mine has not been. I command the punishment, but rarely do I inflict it. Perhaps the fault lies in my own weakness.”

She rubbed his chest, comforting him. “You are a masterful presence, husband. You need only to raise your voice and she easily complies.”

A singular mood came over him then. He looked away for a moment, his eyes reflecting his thoughts that seemed to have traveled to some distant place.

“My father was fond of the whip.”

A brief look of pain crossed his features – and it struck a chord in her heart. To erase that expression quickly, she pressed sweet kisses to his lips and face. And she uttered a reminder she had so often whispered to him.

“You are not your father.”

For several moments she tenderly and wordlessly made him forget old memories. And he responded just as she had hoped. He embraced her and returned her kisses, sighing, but this time it was not a despondent sound. It seemed to her to be a sound of consent. But there was an unexpected sound of pleasantness in his tone as well.

“Perhaps it is for the best. I will lose my daughter, but Lucien will gain a formidable companion.”

She smiled to see a mischievous grin spread across his face. “That pleases you?”

“So then, you wish young Lucien to have the troubles of matrimony that I have had to endure?”

A playful laugh bubbled out of her. “You, of course! Surly, hard-headed beast that you are. Do you not see that Thea is the exact image of you?”

“I am not surly,” was his half-hearted argument. “And I am not hard-headed.”

“Then you are wrong. Or merely daft. I am not quite certain which.”

Before she could entirely finish her words, she found herself lying on her back, looking up at him as she laughed. Her hands fell back against the pillows, and he gently pinned them there with his large hands.

“What of you, woman? Never has there been a more obstinate creature born!”

She giggled as he kissed her neck. “You love me this way.”

His response was a heated whisper in her ear. “I love you in many ways, wife.”

In return, she whispered back, the entire mood around them changing.

“Show me the ways in which you love me.”

In the flickering light and darkness of their bedchamber, the aura of sweet, romantic intoxication was a heady feeling. For now, he was soothed. Tomorrow, it was certain, he would be surly and dark again. But tonight, he was content in her arms, and she was more than content to be in his. To her request, he whispered against her lips…

“It may take the whole night entirely.”


She kissed him, whispering in return. “Let us hope so…”