"Her feet froze, as if suddenly they had been sunk into the thickest of mud. Her mouth fell open. With her eyes slowly rising, she gasped at the sight of the magnificent Great Hall – the enormous vaulted ceiling making her tilt her head back in utter astonishment. She hardly knew the whisper of her own voice.
Great God in heaven!
The floor, the huge columns, the grand staircases and balconies – all were made of glorious marble, and the spaces echoed with voices and footsteps. The brass lamps and railings gleamed in the white light from the atrium above.
A palace! She said to herself. I have entered a palace…" 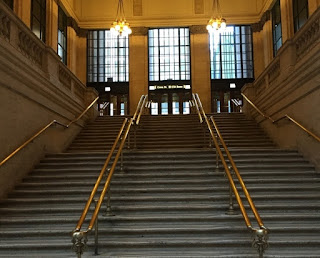 ** Built in 1925, Union Station was hailed as an outstanding achievement in railroad facility planning. The station's ornate Beaux-Arts main waiting room, the "Great Hall", is one of the great interior public spaces in the United States. It has a vaulted skylight, statuary, and connecting lobbies, staircases, and balconies. Enormous wooden benches were arranged in the room for travelers to wait for connections, and two specially-designed underground taxicab drives were built to protect travelers from the weather. The station featured a large, open concourse along the river, with massive steel arches holding up the roof, and several stairways leading passengers down to the platform. 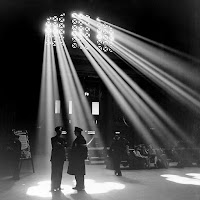 During World War II, Union Station was at its busiest, handling as many as 300 trains and 100,000 passengers daily, many of them soldiers. After the war, however, traffic both at Union Station and on the American passenger rail system declined severely with the growth of highway construction and private ownership of automobiles.

In 1969 the expansive Beaux-Arts concourse at Union Station was demolished to make way for a modern office tower. A new, modernized (but smaller) concourse was constructed beneath the tower.

In 1991, this concourse was renovated, including a renovation of the Great Hall, and the restoration of the skylight, which had been blacked-out during the war and not restored. Restoration of Union Station continues. Numerous spaces within the station have yet to be renovated, and many sit unused, especially within the headhouse. 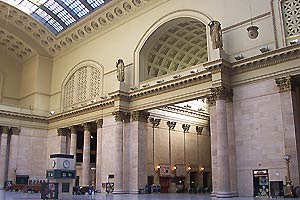 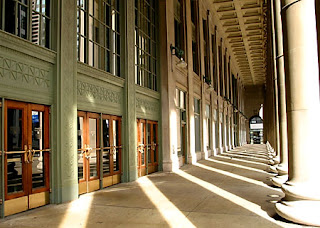 In June 2015, it was announced that Amtrak would be renovating the station, including opening up previously-closed spaces and replacing the worn staircases, with marble from the original quarry near Rome.[19]