"She watched the movement of passengers all around her...and there were so many people to see. Everywhere there were moving bodies, more people in one place than she'd ever seen in her life, all moving to and fro. And what strange, fascinating people they were to watch.
The gentleman were dashing, some wearing banded straw hats - others with handsome fedoras. Their clothing looked like the kind she'd seen only on Sunday mornings - but it was so much better than any country finery. There were no overalls or tattered shirts here. The men wore neat looking slacks and fine button up shirts, some covered with thin vests and others with suspenders. How tidy the gentlemen were...most of them clean shaven, though some wore a small mustache. But not one of them had a scraggly face.
Even their shoes - not mud-encrusted boots, but fine leather loafers - were perfect, and she could see why. Nearby, there was a boy kneeling down with a rag in his hand, buffing the extended foot of a man reading a newspaper...and she smiled.
No wonder their shoes shine so brightly, she thought. She'd never seen anything like it.
If the men were incredible to her amazed eyes, the ladies were even more so. From head to toe, the women were like a flock of brightly feathered birds...so elegant, so colorful. They seemed to preen for all who might be watching. Some had cute little rounded hats that came down low over their foreheads. Other hats were wide-brimmed and decorated with ribbons or feathers. The dresses were of the brightest colors and loveliest fabrics, many of the collars trimmed with fur or beads. Nearly every female neck was festooned with a long strand of pearls, most of which hung down to the waist. The ladies clomped by in thick-heeled, buckled shoes of various colors, but it was their bare knees that stunned her the most. In all of her life she'd never seen such high hemlines, falling just above the knee itself and exposing a scandalous amount of stocking clad leg.
She thought to herself, If Mama and those old biddies at church could see this, they'd fall plum on their faces with shock and shame. And at the thought of it, she smiled again - imagining how very funny it would be to see such a thing." 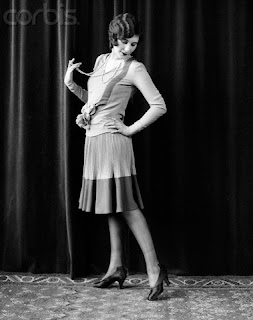 The 1920s were an age of dramatic social and political change. For the first time, more Americans lived in cities than on farms. The nation’s total wealth more than doubled between 1920 and 1929, and this economic growth swept many Americans into an affluent but unfamiliar “consumer society.” People from coast to coast bought the same goods (thanks to nationwide advertising and the spread of chain stores), listened to the same music, did the same dances and even used the same slang! Many Americans were uncomfortable with this new, urban, sometimes racy “mass culture”; in fact, for many–even most–people in the United States, the 1920s brought more conflict than celebration. However, for a small handful of young people in the nation’s big cities, the 1920s were roaring indeed. 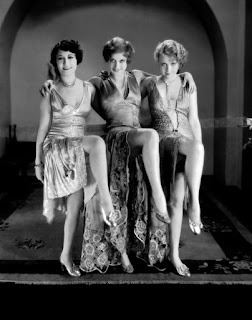 The most familiar symbol of the “Roaring Twenties” is probably the flapper: a young woman with bobbed hair and short skirts who drank, smoked and said what might be termed “unladylike” things, in addition to being more sexually “free” than previous generations. In reality, most young women in the 1920s did none of these things (though many did adopt a fashionable flapper wardrobe), but even those women who were not flappers gained some unprecedented freedoms. They could vote at last: The 19th Amendment to the Constitution had guaranteed that right in 1920. Millions of women worked in white-collar jobs (as stenographers, for example) and could afford to participate in the burgeoning consumer economy. The increased availability of birth-control devices such as the diaphragm made it possible for women to have fewer children. And new machines and technologies like the washing machine and the vacuum cleaner eliminated some of the drudgery of household work.

During the 1920s, many Americans had extra money to spend, and they spent it on consumer goods such as ready-to-wear clothes and home appliances like electric refrigerators. In particular, they bought radios. The first commercial radio station in the U.S., Pittsburgh’s KDKA, hit the airwaves in 1920; three years later there were more than 500 stations in the nation. By the end of the 1920s, there were radios in more than 12 million households. People also went to the movies: Historians estimate that, by the end of the decades, three-quarters of the American population visited a movie theater every week. 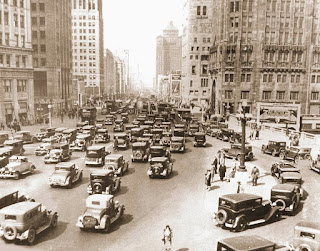 But the most important consumer product of the 1920s was the automobile. Low prices (the Ford Model T cost just $260 in 1924) and generous credit made cars affordable luxuries at the beginning of the decade; by the end, they were practically necessities. In 1929 there was one car on the road for every five Americans. Meanwhile, an economy of automobiles was born: Businesses like service stations and motels sprang up to meet drivers’ needs.

Cars also gave young people the freedom to go where they pleased and do what they wanted. (Some pundits called them “bedrooms on wheels.”) What many young people wanted to do was dance: the Charleston, the cake walk, the black bottom, the flea hop. Jazz bands played at dance halls like the Savoy in New York City and the Aragon in Chicago; radio stations and phonograph records (100 million of which were sold in 1927 alone) carried their tunes to listeners across the nation. Some older people objected to jazz music’s “vulgarity” and “depravity” (and the “moral disasters” it supposedly inspired), but many in the younger generation loved the freedom they felt on the dance floor.

During the 1920s, some freedoms were expanded while others were curtailed. The 18th Amendment to the Constitution, ratified in 1919, had banned the manufacture and sale of “intoxicating liquors,” and at 12 A.M. on January 16, 1920, the federal Volstead Act closed every tavern, bar and saloon in the United States. From then on, it was illegal to sell any “intoxication beverages” with more than 0.5% alcohol. This drove the liquor trade underground–now, people simply went to nominally illegal speakeasies instead of ordinary bars–where it was controlled by bootleggers, racketeers and other organized-crime figures such as Chicago gangster Al Capone. (Capone reportedly had 1,000 gunmen and half of Chicago’s police force on his payroll.)

To many middle-class white Americans, Prohibition was a way to assert some control over the unruly immigrant masses who crowded the nation’s cities. For instance, to the so-called “Drys,” beer was known as “Kaiser brew.” Drinking was a symbol of all they disliked about the modern city, and eliminating alcohol would, they believed, turn back the clock to an earlier and more comfortable time. 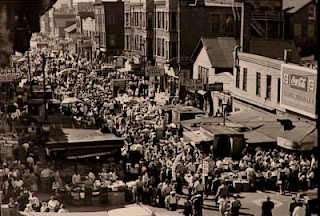 Maxwell Street is an east-west street in Chicago, Illinois that intersects with Halsted Street just south of Roosevelt Road. It runs at 1330 South in the numbering system running from 500 West to 1126 West.[1] The Maxwell Street neighborhood is considered part of the Near West Side and is one of the city's oldest residential districts. It is notable as the location of the celebrated Maxwell Street Market and the birthplace of Chicago Blues and the "Maxwell Street Polish (sausage sandwich)." A large portion of the area is now the campus of the University of Illinois at Chicago (UIC), as well as a new private housing development sponsored by the university.

Maxwell Street Market was located from Halsted Street to 16th street. Although there were many fine stationary department stores located in it, the area's most notable feature was its open-air market, precursor to the flea market scene in Chicago. One could almost buy anything there, legal and illegal, even though the old Chicago Police Academy on O'Brien Street was adjacent to it. 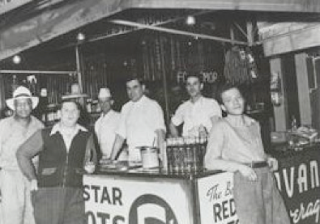 In need of jobs and quick cash, fledgling entrepreneurs came to Maxwell Street – many say it was the largest open-air market in the country – to earn their livelihood. From clothes, to produce, to cars, appliances, tools, and virtually anything anyone might want, Maxwell Street offered discount items to consumers and was an economic hub for poor people looking to get ahead. Merchandise was often considered to have originated from hijacked or pirated railcars/railyards and transport rigs for quick resale and dissemination of articles. Few questions were asked about the origin of a vendor's items for sale, particularly if the price was "right." 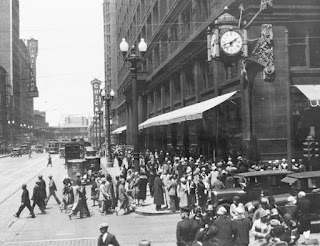 The Marshall Field and Company Building at State and Washington Streets in Chicago was listed on the National Register of Historic Places in 1978 and is part of the Loop Retail National Historic District. The building was designated a Chicago Landmark on November 1, 2005.[27] With approximately two million square feet of available floor space, the building is the second-largest department store in the United States. 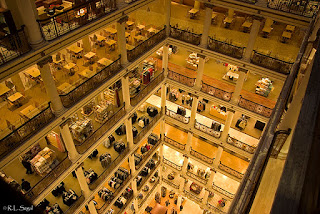 On April 27, 2006, Macy's (Now the owners) announced that the Marshall Field name would not be retained on the State Street store, instead renaming it "Macy's on State Street", a specialized divisional flagship store with some features unique to this single location, including the continuation of certain Marshall Field's traditions under the Macy's name. However, Macy's could not change everything: Because of the building's history and landmark status, it will forever be known as the Marshall Field and Company Building, regardless of which company occupies it.

In the 1920s, the Pier expanded to have its own streetcar line, a theater, and an emergency room. It gained wide recognition in 1922 by hosting the "Pageant of Progress." In 1927 the Pier was officially named Navy Pier in honor of the Naval personnel that served there during WWI.

In this period, the Pier was described as a summer playground, with recreational facilities that included picnicking areas, dining pavilions, a dance hall, auditorium, and children's playground. Radio station WCFL operated from the north tower of the auditorium. During the 1920s, it is estimated that an average of 3.2 million visitors frequented the Pier annually. This decade is sometimes called the Pier's "Golden Age".

Today, the pier is one of the most visited attractions in the entire Midwestern United States and is Chicago's number one tourist attraction. 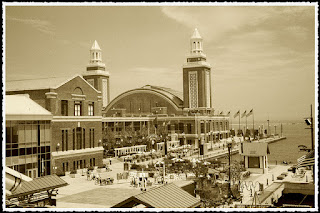 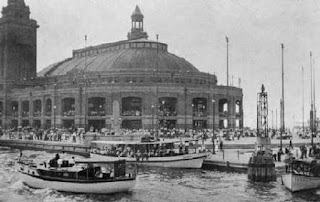 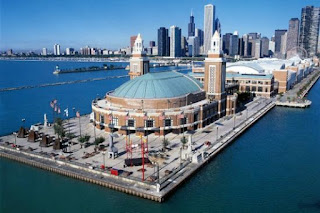 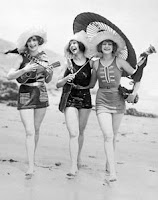 Oak Street Beach was formed by sand washing up against the northern side of Streeterville. Originally, it was under control of the Lincoln Park District, one of several districts in the city that were consolidated in 1934 to create the Chicago Park District.

Through the 1960s the sand area of Oak Street covered more than twice the area it does now, and the water was as much as three feet higher than its current level. The beach was popular for residents and tourists as a summer social spot near down town. 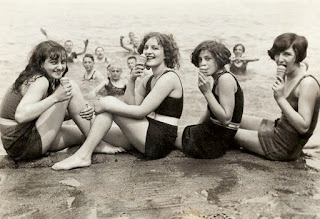 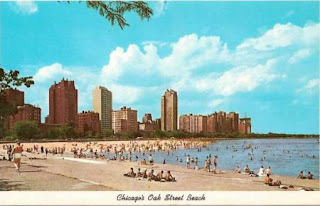