This is totally silly, but if I had my choice in casting some of the roles, this is how it might be... 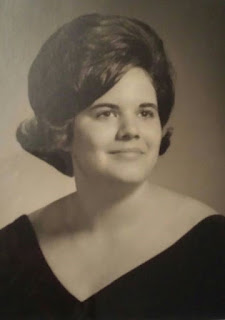 My mother was a southern lady, which means that cooking was in her blood, and she was very good at it. She usually cooked and baked without needing a recipe - her memory was excellent. She could rattle one off over the phone, which she did for me last year. So here is the recipe for her apple slices. My dad always loved them, and still does when my sister finds time to make them for him - and he still sneaks into the kitchen in the middle of the night to steal them. :) They're also a huge hit when I take them to work for a party. I usually have to make two batches.

Mix the apple pie filling, flour, cinnamon, and sugar together in a large bowl.
In a 9 by 12 ungreased pan, put 1 1/2 rolls in bottom (Approximately 1/4 inch to sides of pan)

Spread mixture to cover crust. Take the other 1 1/2 crust and lay over top of mixture. Do not fold the crust together. Trim the top layer even with the other. Put a pat of butter in each corner of pie. Bake at 425F until crust golden brown, approx 45 minutes. Let pie cool completely.

Stir coffee and margarine until margarine is melted. Slowly add powdered sugar until creamy. Spread over top of pie. (Make sure the pie is completely cooled before applying icing)

A young woman from Stones Mill, Virginia - a mining community. At 20 years of age, she is considered an old maid by her family and neighbors, who also consider her a black sheep. Unlike the other young women in the community, who follow the custom of marrying young and starting a family as soon as possible, Grace fears that marriage will be an entrapment. She wants to experience love on her own terms, but also has a great desire to learn and to see the world. An avid reader, thanks to the encouragement of a former teacher, her favorite book is "Jane Eyre," which she often turns to for wisdom and strength, quoting it in times of need. Shy and sometimes insecure about her lack of knowledge about the world, she is also stubborn and independent.

Grace's childhood friend, Charlie returns to Virginia after a long absence, hoping to reunite with Grace and marry her. Abandoned by his father as a boy, he was raised by his aunt and uncle and served two years in the military. But he is a troubled young man, quick to anger, and also suffering from the inherited drinking troubles that ruined his father.

Grace's cousin and best friend since childhood, she is only a few years younger than Grace but is like a sister to her. Though she and Grace had much in common when they were girls, their bond is tested by their growing differences regarding love and marriage. Ollie admires Grace's strength, but isn't willing to go against tradition when it comes to being a woman. She is content living a simple country life and looks forward to the security of being a wife and mother. She also has feelings for Charlie Hillard, which causes trouble between her and Grace.

A nightclub owner, 35 years old. He lives in Chicago, but was born to Irish immigrants. He is a veteran of the Great War, where he was an Army surgeon. His intent was to carry on as a surgeon after the war, but due to a traumatic injury sustained in the field, he instead went into business for himself. Because of his experiences in the war - which eventually led to the failure of his marriage - he is sometimes moody and dark, and he suffers from Post Traumatic Stress Disorder. Although he's seen as standoffish by most, he manages to display an offbeat sense of humor when the mood suits him, and he is a respected businessman and member of the community.

Henry's happy-go-lucky younger brother. Toby is 22 years old and a skilled musician, his main instrument being the trumpet. He is also a dancer and a singer, and is a popular performer in his brother's club. Though he suffered a sad loss in the recent past, he is nonetheless friendly and kind, taking an instant liking to Grace when they first meet.

Grace's oldest brother. Jack is 32, and like his sister, he escaped his life of abuse and poverty. Now a manager at a train station, he is quite content with the life he has made for himself and has no desire to revisit the past. At one time his sister's protector, shielding her from their abusive father when they were younger, he can't shake the guilt he experienced when he left her behind. His protectiveness of her is still strong, but is now challenged by Grace's growing independence and womanhood.

Jack's wife and Grace's sister-in-law, formerly her teacher. Alice is a modern woman who comes from a prominent and highly educated southern family. Her mother was a suffragette and her father was a salesman and successful businessman. After marrying Jack, Alice continued for a few years as a teacher at a local academy for girls. But after suffering a miscarriage, she quit teaching and found solace as an artist. Strong and opinionated, she is also loving and has a mischievous sense of humor. She and Grace are very close, even after such a long time apart, and often confide in one another.

So there's the main cast! Still interested in reading? The first chapter will be posted tomorrow for your reading enjoyment. :)